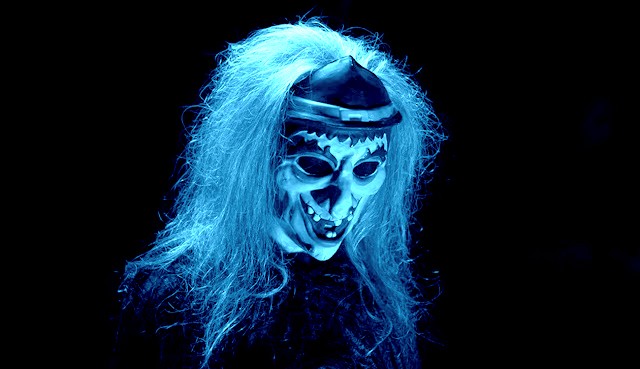 On Halloween, a group of friends encounter an "extreme" haunted maze house hat promises to feed on their darkest fears. The night turns deadly as they realised the people behind the masks are willing to make sure their nightmarish fears become reality.
Haunt has many intriguing concepts at play, some that gel well, and others that drag along like a loose limb on a string. The elements that work are (most of the time) executed with a solid sense of tension and flair, banking on its bargain-bucket gore and drawn-out chase sequences to cash on its appeal. This often flows well, delivering a first half that really taps into everything we might fear from such a narrative, and for the most part delivers it with positively taut results.

The second half however can't wait to reach its final credits. Everything feels rushed, the once tension-pumped action now feels deflated and inept, resulting in cheap thrill results that take a backseat to a sub-narrative that is as insubstantial as it is painfully unnecessary. Points for an attempt to try and add some depth to a pretty straight-forward slasher story, when really sometimes  all we want is just that - a straight-forward slasher affair. Nobody is coming into a film about a killer scare house for its brains and brawn are they? Sure, a sense of intelligence is great, a self-aware overtone is welcome, but when the two don't mingle its results can be sloppy... everyone meet Haunt.

To think the writers of the already modern classic A Quiet Place penned the script quite frankly has be a little baffled as they wrote a film based entirely on tension. Now, it does show these colours in drips and drabs throughout, but not with a fraction of ingenuousness like they did their previous film. In saying this, Haunt is not without its merit, and it would be rude to not reward it on its chilling interpretation of a story the genre has rinsed dry for the past 5 years. There's proof in the pudding here with plenty of blood and gore to prove it, and despite Haunt never fully reaching its true potential, it is still an enjoyable way to pass 90 minutes, even if the pace is choppy and the ending is piss-poor.

Much of my disapproval stems from the pointlessly ugly sub-plot as without it Haunt would have been an entirely different beast, one that would reach far beyond the horror fanatics who actually chose to watch this. It's not without its (too) many faults, but slasher is difficult to get right. Haunt take a stab at trying to establish something different amongst an estranged sub-genre, and given its under-the-radar promotion, there's enough meat on these bones to have a good munch, so dig in. It's a shame really, as the ingredients are all there, it's simply the execution that feels lacklustre. In saying this, you never know, it might catch your appetite.


VERDICT
Welcome to 2019's answer to Hell Fest, a passable slasher that finally finds its feet once it hits its midway point, even if its narrative takes an unwelcome narrative shift that is as meaningless as it is ineffective.