Ready or Not Review 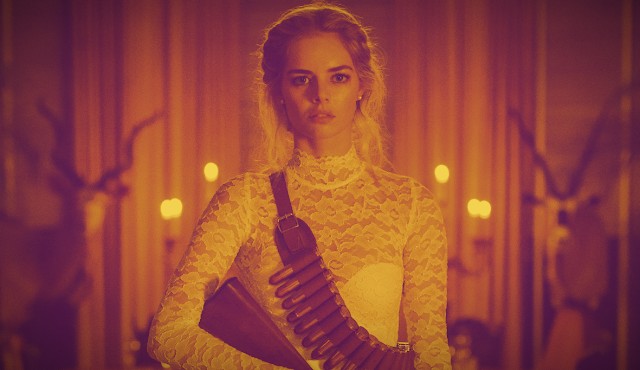 VERDICT
Welcome to one of the most eccentrically entertaining horror movies of 2019. Ready or Not is fun, fast and fierce, making a brand new kick-ass final girl out of Samara Weaving. Ready Or Not s a Deliciously Entertaining Romp with a Dark Comedic Sting.

Grace couldn't be happier after she marries the man of her dreams at his family's luxurious estate. There's just one catch, she must now hide from midnight until dawn while her new in-laws hunt her down with guns, crossbows and other weapons.

Since 2011, I have been ever-so impatiently been waiting for something along the lines of Adam Wingard's You're Next to come back into my life, all guns blazing. Now, while we have had an adventurous and eclectic range of films sprout from the genre this past eight years (One even bagging an Oscar - I'm looking at you Get Out), none of captured the essence that You're Next utilised all those years ago. Yes, better films have been released since then, films that have gone on and smeared their prideful stink all over the horror community (Hereditary, The Cabin in the Woods, It Follows, Halloween etc.), very few have actually managed to leave such a lasting impression on me like Wingard's You're Next. A subversive, exhilarating game-changer for the home-invasion sub genre that was as wickedly dark in humour as it was in horror.

This genre hybrid was a huge success with a tonal balance that created an deniably entertaining concoction that is to be admired to this day. For years I have been waiting for a good juicy piece of home-invasion meat, one that didn't duplicate the same run-of-the-mill fodder the sub-genre has been subjected to for years. In fact, a memorable home invasion flick (or at least one with some substantial value) has become increasingly more difficult to hunt out, and we are now buried beneath films like The Intruder, Breaking In etc that are diluting everything that made the sub-genre a staple in the first place. Finally, 2019 has brought us something worth waiting for, a film that has satisfied an unsavagable hunger that I have craved since 2011; This my friends is Ready or Not, and oh boy what a delicious treat this was.

Like some people I know, the look of Ready or Not wasn't something that might have tickled their fancy, something to a viewer out looking for something to give them a spook coming into October might not fancy. They're right. Ready or Not isn't a film to provide a few creepy experience, nor is it a film that provides any scares. That's not what it's trying to do, not in the slightest. Ready or Not is a masterfully taught piece of filmmaking that lores you in with its unnerving (and constant) sense of dread, and keeps you on your seat with its frequent pitch black humour that works on every level. It's almost the perfect blend; and whilst often letting the horror and comedy come hand-in-hand at equal measure can cripple the dominant genre at play, this is certainly not the case, as often the comedic elements compliment the horror on-screen, and vice-versa. It's a deliciously evil combination that is utilised to near-perfection through the duration of it's runtime, and it's capitalised on by the time we reach the end credits. It's incredibly violent, and devilishly gruesome, the kind to make squint with cringe but glee with satisfaction. Even right up until its bloody finale, the gore is plentiful and presented in enough new packages to stop us ever getting bored.

It's bizarrely entertaining for all the right reasons. It's foolishly delightful and it knows it is. Not once to Ready or Not ever stop for a moment to take itself too seriously, but serious enough to ensure it means business; and carnage. It rarely takes its finger off the pulse of subversion, constantly toying with our expectations. And while we always think we are one step ahead on expectations, director Matt Bettinelli-Olpin is there to remind us that Ready or Not is smarter than that, a lot smarter. Don't expect something that has never been seen before, or something above and beyond its genre. It's a home invasion movie through-and-through, one that sticks to the structure that we are over-familiar with, ultimately one that takes that format and spins it on its head. We've seen these scenes before, ten times over, but I can guarantee you've never seen them this way, or at least not this good.

Whilst the content is fresh and the tension is thick, a lot of credit has be given to the absolutely stellar cast all-round, who are as gleefully disastrous as they are genuinely witty. Ready or Not deserves a merit for the cast that surround it, and for the cast who essentially bring the bonkers energy that this film needs. From Andie MacDowell to Adam Brody there is not a single weak link to be found, with special spotlight attention on Samara Weaving as Grace in a performance and character that has already made her mark on the horror genre. The character is brilliant, Weaving is superb, and her gradual evolution? Well, this will be enough to make a cosplayer cream their pants. 2019 has found a new final girl in Grace, one who's look will be so iconic it will be very difficult to forget her image.

For me, it's difficult to critique a film I literally has so much fun watching, and so much fun talking about afterwards. It's undeniably entertaining with enough of a twisted dark humorous backbone to stop it from falling flat or feeling stale. Now, despite a few pacing issues towards the back half of the film there really isn't much for me to say against Ready or Not. Welcome to one of the top contenders for 2019's most ludicrously entertaining horror films of the year. Splashed with enough ferocious violence to satisfy any horror regular, and enhanced with plenty of pitch black humour and colourful characters to make for a satisfying dark hybrid. This is my way of saying how much of an enjoyable watch this was, one to make itself and its main star Samara Weaving a staple in the genre for decades to come.