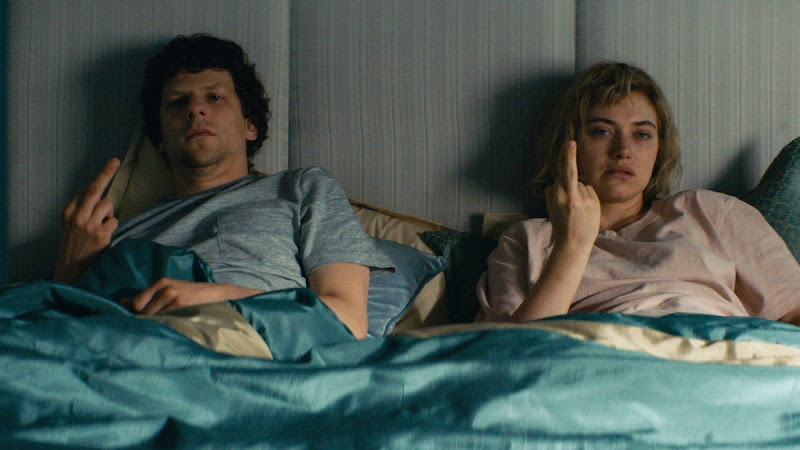 VERDICT
Vivarium is a simplistically disturbing suburban nightmare with a captivating story and little room for growth. Enduring its drab middle act may prove tricky, but once Finnegan blows the dust of the eerie intensity established from the beginning, you'll find there is much to be desired with this unsettling little indie-sci-fi thriller.

Tom and Gemma (Jesse Eisenberg and Imogen Poots), a quirky couple are looking for the perfect home. When a strange real-estate agent takes them to Yonder, a mysterious suburban neighbourhood of identical houses, Tom and Gemma can't wait to end the house viewing and leave. When they try and exit the labyrinth-like housing development, each road takes them back to where they started. Soon, they realised they are trapped within this suburban maze. Once trapped, they are provided with a child, and are quickly plunged into a terrifying nightmare scenario when they are expected to raise a child, that is clearly some otherworldly being.

This indie sci-fi thriller Vivarium from Irish filmmaker Lorcan Finnegan is many things, one definitely being quite the head-scratcher. Not because of it being an intellectually challenging story, or one that is laced with twists and turns to create an unpredictable viewing, but a film that delivers a narratives so peculiar that it is like something you've never seen before. Take this with a pinch of salt, as there's certainly aspects which don't make the landing of such an ambitious plot, but let it also be known that Vivarium contains some impressions visual and narrative storytelling, enough to forgive some of the mid-act waffle that cripples the films momentum.

Finnegan gets the ball rolling with power, keeping the story taught enough that we are thrown straight into the mystery early doors. This works extremely well as the tension begins to bubble within the first ten minute mark. The performances here from our main cast member already begin to show their brilliance, especially Jonathon Aris who sets a chilling foreshadowing tone with his appropriately eerie character Martin. The small (yet effective) amount of screen time we have with Martin is enough to set the tone, and we, like Tom and Gemma are forced to endure something that is so ominously intense that it leaves a lingering sense of dread.

Unfortunately, this soon begins to simmer once Finnegan establishes the plot in its whole, and realisation settles on the simple fact that, after the 30 minute mark, there really isn't much else for the story to go. Yes the labyrinth maze of suburbia is strangely terrifying, and the strenuous repetition is effective, but after 15 minutes of having the child introduced, Vivarium begins to fall flat, and grow increasingly more stale up until after the sixty minutes in. The fantastic Poots and Eisenberg, and the deadpan humour do prevent this film from becoming a little too one-note, but this doesn't exuse more than a few scenes that will be a task to sit through, even in these current homebound world we are living in. 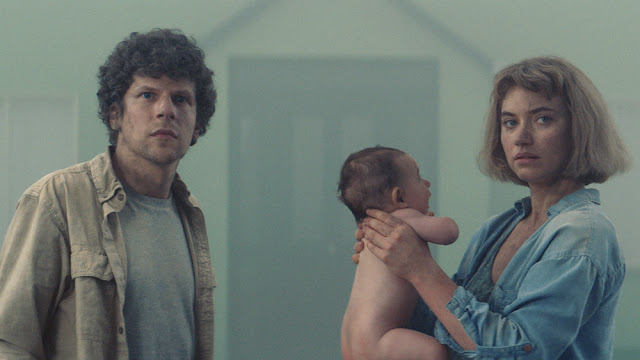 There is a glimmer of brilliance in Finnegan's choice of release here, as what our main couple are enduring is poetically reflective of the life we are living in this mad pandemic virus. I found myself identifying with the irritated attitude our characters develop, and sympathised with them when their child (the boy) was well deserving of a slap. Vivarium is intelligently relative right now, and can definitely be perceived as as Finnegan holding a mirror up to the idealistic yet treacherous concept of what makes the perfect home, and the urge to be the perfect family.

In fact, there's so much underlying aspects of Vivarium that are so incredibly reflective of the inevitable repetition that comes once a spunky couple are weighed down by family life, securing their "ideal" home and tolerating each others impurities under the same roof constantly. Finnegan exposes the dangers of the nuclear family here, and forces us to endure it too, warts and all. We even get those little moments in which Tom consistently chips away, digging a whole, not to be talked to, helped or interrupted by Gemma, who becomes a slave to ensuring nothing but contentment for their boy. This moment is humourous with a dark sting, and will be reflective of reality to many, but to those inside Vivarium is nothing but a nightmarish loop.

This distorted utopia Finnegan creates is what's most effective, orchestrated by a Burton-esque palette that is as gorgeous as it is hauntingly off-kilter. The early 80's, Romero's Day of the Dead-like synth is undeniably effective, and carries the tension through to the final act, which although doesn't hit a payoff point that excuses the slow middle act, does add to the bankers reality Finnegan has crafted, and highlights the eeriness established from the beginning. While Vivarium does lose a tone of momentum when it hits the mid-way point, by the time it reaches its end, I can't shake the distinct feeling of unease I had to endure for over eighty minutes, and I can't deny that a film like this was an experience I have quite been exposed to before. I have been feeling really under the weather these past few days, and let's just say this only made me feel worse. Great job, I guess?