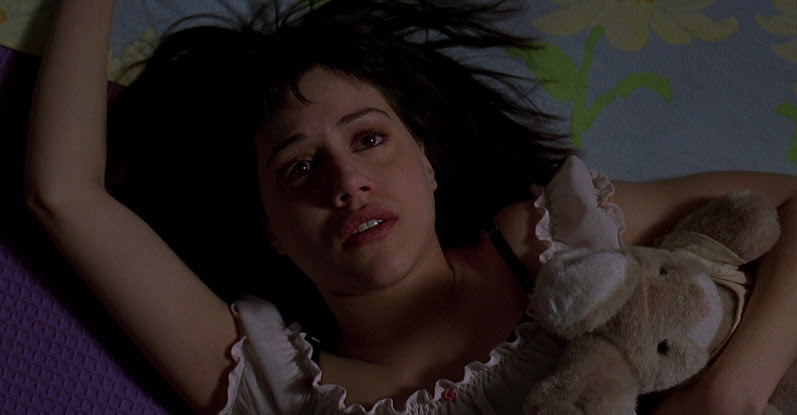 VERDICT
Like a fine wine Cherry Falls gets better with age, proving it to be a fun late 90's slasher with more on its mind than just gratuitous violence and mindless sex, even if its narrative says otherwise.

A psychotic serial slasher starts a bloodthirsty murderous rampage at Cherry Falls, a town that saw a young woman get raped and vanish 20 years before. Local authorities realise there is a connection when the killer sports the same woman's image, as they go around and pick off virginal teens one by one. This leads to the local teenage population organising a sex party in order to lose their virginity and thus no longer be targets for Cherry Falls mysterious killer.

Late 90's slashers will forever have a place in my charcoal heart, especially when it comes to slashers, or essentially anything written by Kevin Williamson, who's always had a nack for constructing some of the most memorable teenage characters the genre has ever seen. This obviously all started with Scream, which birthed arguably the most entertaining era's of slasher horror. Whilst none have ever compared to the grand daddy of them all (still talking about Scream here), many had rid on its coat tail in an attempt to recapture the magic of it. Many have failed but a select view gave it a good swing  with mostly successful results. Cherry Falls belongs in this category, towards the lower end of the spectrum, establishing itself as a fun and frantic slasher with the right intention without entirely the right perception.

Cherry Falls takes Scream influence a little too literally, pumping out a narrative that is the entire opposite of one of Scream's essential rules; you can never have sex. It's like the writers literally watched Scream, made little notes and their note pads and crafted a slasher that tries too hard to be everything Scream isn't. In some ways this is a success, as it never reaches the levels of humour or tension Craven and Williamson so expertly crafted, but admittedly does a fairly good job of trying to be something memorable, or at the very least worth watching.

Compared to other slashers of the same ilk with the likes of Urban Legend and Valentine, Cherry Falls serves more of a purpose, and has much to say than a high body count. Yes we have the mediocre whodunit elements thrown into the mix, given the time it's entirely expected, but Cherry Falls works best when it leans into into its core narrative, focusing on the local teens and parents, in there pursuit to have every teen devirigined in an attempt to keep them off a killer's hit list. It's a really fun motive for a killer, and an even more enjoyable motive for the teens to act upon their lustrous desires. It's a heft nod against overdone genre tropes, that is very effective despite being incredibly on the nose.

Cherry Falls may not be overflowing with originality or flare, but it works best when it it's not forcing itself to break the mould. The chase scenes here are taut, masterfully assisted with a strong late 90's grunge score that really amplifies each scene it coats. To this slasher's disadvantage, the tightly edited, quick paced chase scenes are too and far between, and the overall film would have benefited from packing a stronger punch in this department. Jody's chase scene in the school is fantastic, and I wish the rest of the film utilised this same energy, especially when with its final act which sets itself up for the perfect third act bloodbath, but disappointingly doesn't utilise its full potential for something that could have truly been memorable.

Many of the scenes play out with inept results, but luckily the strong cast carry most of its cumbersome scenes to the finish line, aided by witty dialogue and a colourful bundle of characters. Brittany Murphy as Jody is exceptional in her portrayal of a genuinely likeable and layered final girl who deserves more buck that what she's credited for. Along side her is a stew of sarcastic and variable teens who's distinct personalities aid the satire that Cherry Falls so willingly places on the back burner. The entire cast is amusing, and that paired with some manic chaos and tasteful gore make for a late 90's slasher genuinely worth your time.