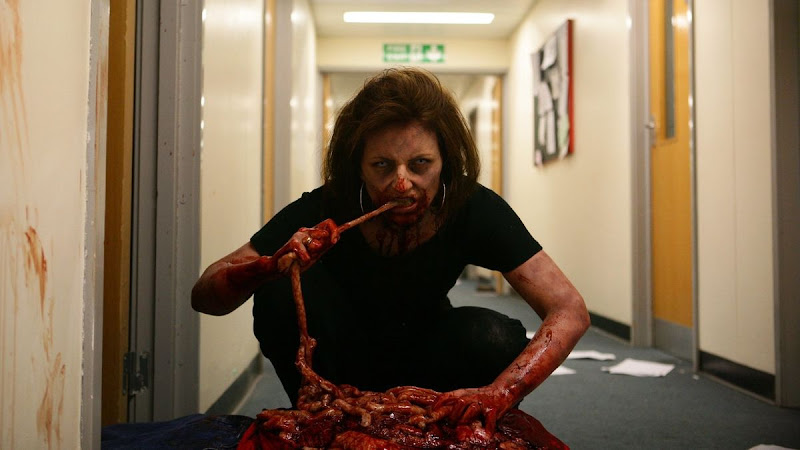 VERDICT
This 2008 UK zombie series remains very much in tact, and it's arguably one of the strongest entries into the zombie sub-genre of the past 40 years.

During a fictional UK series of Big Brother, a zombie outbreaks occurs throughout the country. With the housemates indoors unaware of what's happening on the outside world, they begin to realise that they are trapped within the Big Brother house, as they fight for survival from the zombies outside.

What a perfect time for Charlie Brooker's Dead Set to resurface and regain the obsession it deserves now as strongly as it deserved back in 2008. There is some poetic symbolism floating around in light of the corona virus, as just a couple of weeks ago on German Big Brother the whole world bared witness to the housemates finding out for the first time that a global pandemic was well underway. The beauty here lies within Brooker's sharp attention and eerily coincidental parallels and predictions to the future with such shows like Black Mirror, and now with Dead Set, which have both now reflected our future with chillingly accurate results.  Like German Big Brother and the housemates completely aloof to the pandemic on the outside, Dead Set and its housemates obliviousness to the zombie outbreak on the outside is very much a reflection on this. So, whilst you're trapped indoors, take this time to revisit Dead Set, or if you're luck enough to witness it for the first time then you're certainly in for a treat.

Back to the important stuff, Dead Set. In 2008 during the week of Halloween, E4 released a five-part series which my little ass ate up with a knife and fork during its release. Back then, it was an absolute hit for Big Brother fans and horror fans alike, so if you were obsessed with both (like myself) it was like a wet dream come true. Charlie Brooker undeniably delivered something with a distinct point of view with a savage zombie bite. It was one of a kind for its time, and arguably started the TV zombie craze that was soon followed by the once captivating The Walking Dead.

Much like Brooker's other work on Black Mirror, he has a precise narrative style that is poignant in its modern reflective on society and its consumeristic greed, and obsession with media within technologic advances. His work now packs a more blatantly dark and twisted punch with Black Mirror, and although those satirical message on society isn't at the forefront with Dead Set, it's still a clear theme that runs underneath the intense carnage and zombie gore. 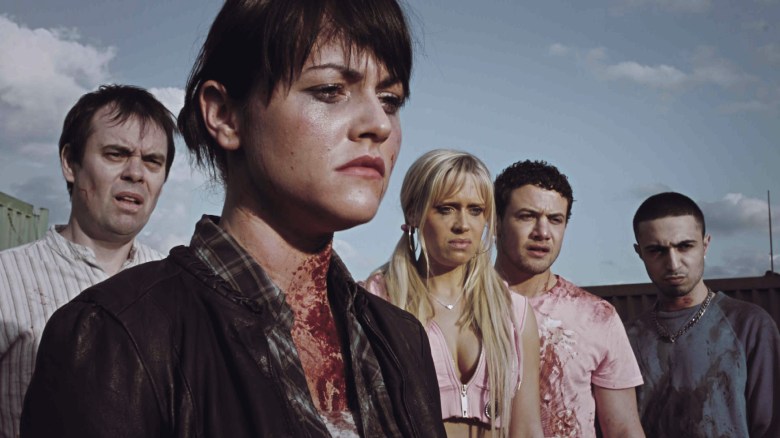 Dead Set first and foremost is an outstanding zombie experience, that is packed full of nail-biting intensity and gruelling violence, coated in a gritty British cinematography that is as raw as it is effective. Much of Brooker's work here resembles the likes of 28 Days Later and 28 Weeks Later, with its grim approach to the apocalypse, sharp with brilliantly distinct characters and a nasty sting for black satirical comedy. Everything Brooker deliver its on brand, and is crafted with a distinct style that is as infectious as the zombies within it. The characters here are nothing short of brilliant, as dialogue bounces seamlessly between contrasting characters, creating a genuinely funny, often charismatic group encounters between the housemates that makes any zombie-less scenes fun, fast and ultimately entertaining.

Once we get past a seemingly slow start, the pace shifts into overdrive, and we are exposed to some of the most savagely intense zombie action the sub-genre has ever seen. The horror in Dead Set is truly phenomenal, and Brooker does not shy away in creating a bleak existence in which we can be convinced there is no hope for anyone aside from being torn alive by flesh eating zombies. This aspect is effectively unsettling, and allows Brooker to toy with our expectations and emotions through a 2 and a half hour duration time.

The gore here is gloriously gruesome, and we are forced to endure some horrifying moments in which characters who we grow to love get torn to shreds. We also get the pleasure of witnessing some brilliantly written yet tremendously hateful characters also meet there demise in the most satisfying of ways. It's great having zombie gore, it's better having the characters to exist within it, but it's the best when it's all executed with near-perfect results. Listen, if you still haven't seen Dead Set then you are in for an absolute treat, as not only is it a must-watch for any zombie fan girl, but it's also on Netflix and deserves your time and attention! This is British horror and satire at its finest.