We Summon The Darkness Review 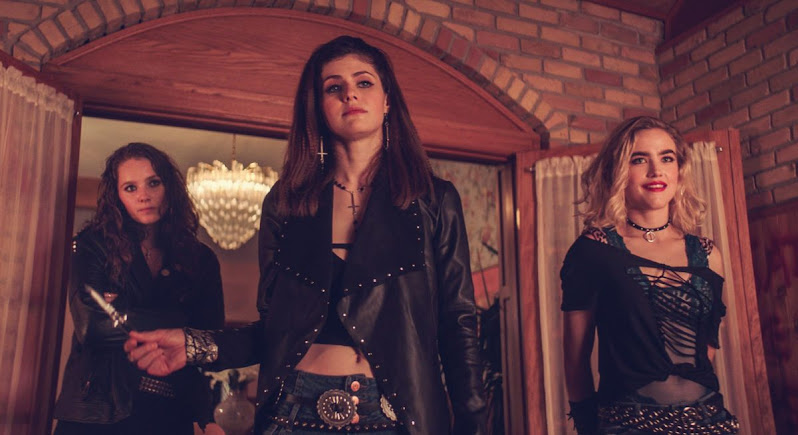 VERDICT
Gory, entertaining and often funny at a flaw, boasted by charismatic performances from Daddario and Hasson. Expect a plot with verve or ingenuity and you will come out of this with a whimper.

The killing spree of murderous Satanists has already led to 18 deaths throughout America's Heartland. Three best friends Alexis (Alexandra Daddario), Val and Beverly embark on a road trip to a heavy metal music festival. Naive, they bond with three seemingly fun-loving dudes and soon the group heads off to Alexis' country home, a very secluded place, for an afterparty. What should be a night of fun and youthful debauchery may instead take a dark, deadly turn. With killers on the loose, can anyone be trusted?

Welcome to 2020's first and campest satanic panic movie, tapping into some seriously 80's tones to create a riffraff of horror, comedy and plenty of gore to keep genre fans at bay. From the get-go there is a feast of variety on offer with a film like We Summon The Darkness, which is set-up to tickle the pickle of heavy metal lovers, sassy sister comedies and satanic gore fiends alike. Whether or not these needs are met is a different story, but you can't knock 'em for trying, and although you can see some solid effort and occasional flare present from the word go, We Summon The Darkness doesn't quite have the chops to always make the landing.

With a film like We Summon The Darkness, it's hard to discuss the "twist" straight off the bat without spoiling what the film is actually about, but watching the trailer alone might already let you into that. Everything about this film's promotional work all point fingers at the big reveal, which I think is a shame as the element worth revealing upon release is that alone, something that could have created a bigger impact when watching. Aside from seeing one single photo of this movie (the one chosen above) and nothing else, even I found the "big twist" to be predictable and slightly inept, regardless of already being clued in. Once that twist has run its course, I could almost feel the filmmakers trying to tug at the rug beneath my feet once again for the final act showdown, however, I was even able to sniff that one out from the first 15 minutes. Perhaps if We Summon The Darkness was more focused on delivering pure entertainment instead of getting tangled in its own mythology, then this would have been an even more seamless experience. 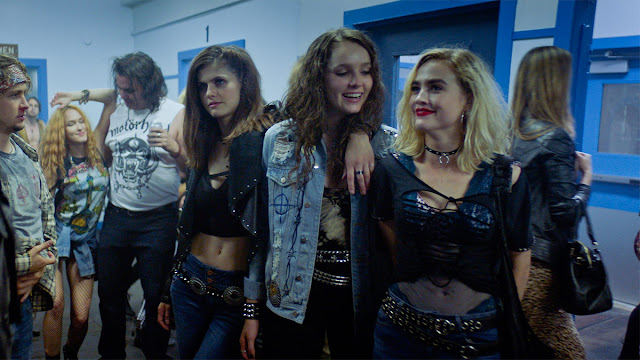 In saying this, please do not take my tone and negative entirely, as what We Summon The Darkness does well, it does really well. Behind this satanic ritual slash 'em up is a truly charismatic sister comedy that relies on the talents of its central three ladies to deliver its entertainment value, and boy is it provided in bucket loads. The banter between them is infectious, their 180 flip in motive is believable and portrayed with one finger firmly in satire, and the other in bad-shit crazy characterisation that is infectiously bonkers. Alexandra Daddario is the show stopper here for me, as she delivers a performance so deranged yet alluring that I found myself still rooting for her until the bitter end. Since her days in Texas Chainsaw 3D (which nobody gives her enough credit for), she has been able to lead the herd when it comes to horror movies, perhaps making her this decade's new and improved Danielle Harris (of whom I still deeply admire). Maddie Hasson also pulls out all the stop here, being as equally enticing as she is ludicrously loopy. The performances overall here work, and aid the dark humour when being paired with bucket loads of blood.

We Summon The Darkness has glimpses or originality and flare throughout, sprouting up through heaps of generic sequences that do more damage than good. Luck enough, these moments do add a little zest to the experience, and remind you that there is a healthy chunk of potential to be admired. Whether it's the charming cast or the plentiful gore, there seems to be something that will keep everyone pleased, even if not fully satisfied. The gore is delicious, the home-invasion game of cat and mouse is entertaining, if a little watered down, and the characters are ultimately the saving grace here, even down to the "coke booger' step-mum which add a tantalisingly fun element to the whole experience. Now, this won't be breaking new ground by any means, but it's still a passable way to kill 90 minutes.