David Arquette making his return as Dewey in 'Scream 5'! 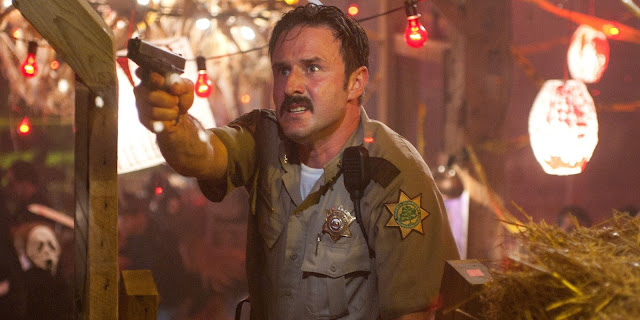 Scream 5 has quickly become the most hotly anticipated horror movies of future releases, and has become a hot topic at the tip of everyone's tongues for the past couple of weeks, following the news of Neve Campbell being in talks with Matt Bettinelli-Olpin and Tyler Gillett. Information on the upcoming horror sequel/reboot/remake(?) has been very scarce, and everyone involved his been keeping their lips locked over spilling any sort of details or info in regard to the potential narrative path Scream 5 might take.

Just yesterday confirmation was released that David Arquette who played the iconic Dewey Riley is confirmed to be returning to Scream 5! Whilst this news is vague, it also lets us know that Scream 5 will be going back and resurrecting its original trio for what hopefully looks like a follow-up to Scream 4 ten years later.

Arquette spoke with Entertainment Weekly in regard to reprising his much-adored role of Dewey who will pursue a brand new Ghostface. David Arquette had this to say; I am thrilled to be playing Dewey again and to reunite with my Scream family, old and new," said Arquette in a statement. "Scream has been such a big part of my life, and for both the fans and myself, I look forward to honoring Wes Craven’s legacy.”

Kevin Williamson, who has been brought on a executive producer of the upcoming sequel had this to say, “I'm excited to reteam with David and work with Jamie, Guy and Radio Silence on the next Scream," said Williamson. "Their take on the movie is both original, inventive and honors Wes' legacy in a wonderful way.  Ready or Not  was my favorite horror film of last year and I can't wait to see what their amazing talents bring to the Scream universe. I'm thrilled to be a part of it."