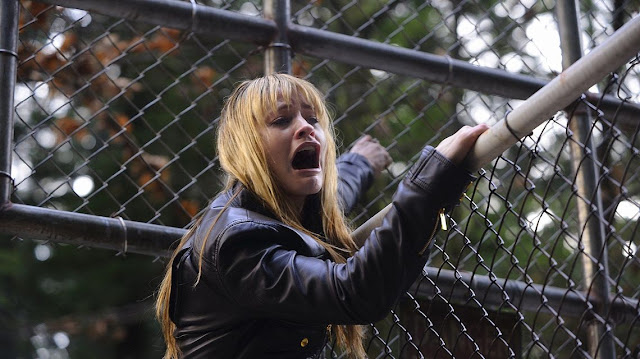 Scene of the week this week is none other than the most iconic and memorable scene from the hit 2009 slasher mini-series Harper's Island, which saw a large group of family and friends return to their childhood home in attendance of a wedding, the island of a troubled past. One by one the cast begins to be picked off one by number in gruesome manners, leading people to believe John Wakefield, a serial killer from years prior is back, or that someone else is taking murder into their own hands.

Not only was Harper's Island a brilliant slice of slasher TV, one of the OG slasher TV series' in fact, but it also produced a handful of dramatic and intense sequences which inevitably knocked off a few of our favourite players back when it was aired. It's talented cast was certainly not put to waste, and them ultimately meeting their demise always cause a gut-wrenching moment, especially for little gay boy Jack.

This is most relevant when it came to the fan favourite couple of the show, Cal & Chloe (played by Adam Campbell & Cameron Richardson) the bleach blonde Barbie & Ken couple who's love was beyond the archetypes forced upon the characters (Chloe being the obvious flirt and Cal being the snobby young entrepreneur. Both of these characters were loved, which made their untimely yet highly effective demise all the more devastating.

This final moment for Chloe & Cal is not only brutal, but it's horrifyingly beautiful. "You can't have me" says a heartbroken Chloe before throwing herself off the bridge so she could be with her fiancé in the afterlife. Ahh shit bitch I need some tissues; gets me every time! Without further ado, here is the full scene in the link below.