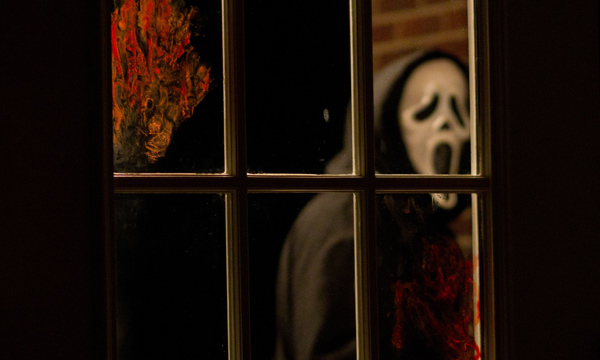 With Scream fever in the air with the recent news of David Arquette joining Scream 5, as well as Neve Campbell being in talks to join, it's appropriate to go back and give this brilliant slasher franchise a revisit, and look back at the killers that came before it. Throughout this list there will be no mention of Scream: The Series Season 1, 2 and 3, so if you are here for that look elsewhere, as I do not mess with that bullshit. So without further ado, here is the Scream franchise killers ranked worst to best. 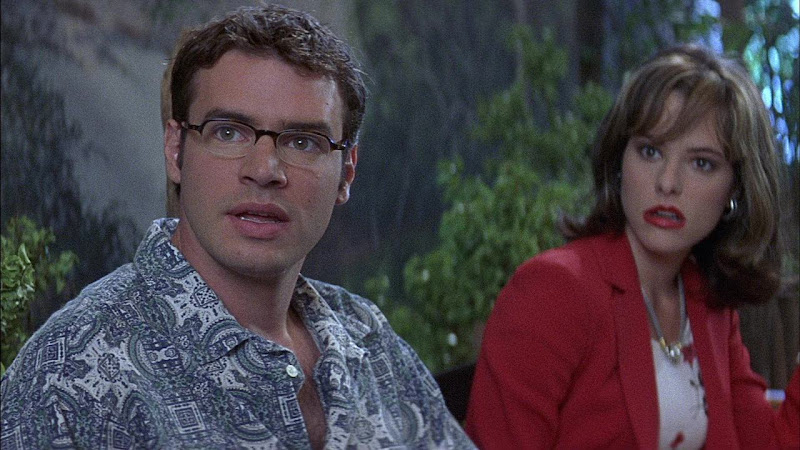 7. Roman Bridger - Scream 3
With no surprise to virtually anyone, Scream 3's Roman Bridger is easily the weakest of the killer reveals, and is also the most distastefully elaborate motives of the entire franchise (remember, the woeful TV series does not count here). Roman as a killer isn't that bad, he just pales in comparison to the rest of our knife-happy bunch on the list below, What makes Roman bottom of the pack however is purely and simply his motive. Not only are we bogged down with more Maureen Prescott explanation, one that adds more ineffective twists to the central mystery whilst also simultaneously shitting all over each killer and their motive that came before it.

The final act reveals that Romas was in fact behind the original killings in '96, and orchestrated the whole thing, using Billy and Stu as his puppets to take the fall, all because Maureen abandoned him (her son), ditching her "Hollywood" life in favour of one with Sidney and her father. What makes matters worse is that we actually see a dead Roman impaled with a knife, and after Gale literally checks his pulse he is believed to be dead, ala we rule him out as killer. The very idea that it was a prop fake dead version of Roman is a stretch, and making us believe Roman has been the mastermind behind this entire trilogy is even more of a stretch, one that is beyond logic, rhyme or reason. Perhaps being the killer in the weakest entry in the franchise won't be winning you any merit either. 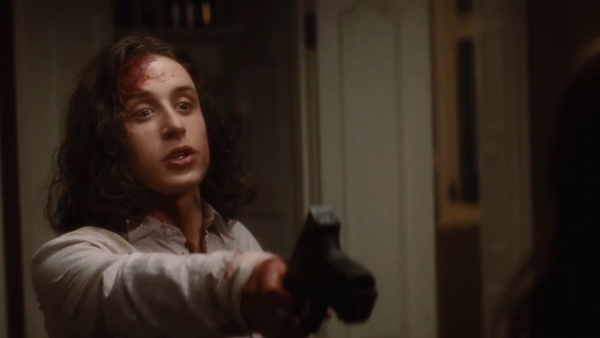 6. Charlie Walker - Scream 4
Scream 4 was a big step up from its proceeder, and proved that Ghostface is still a force to be reckoned with ten years later. The killer reveal(s) was one of the best we seen throughout the franchise, however this was not down to the reveal of Charlie being the first of two killers. Completely outshined by Jill's reveal, Charlie acts more of a Randy and Stu lovechild, one that lacks the energy and charisma of both these characters.

Charlie is not one to rule out however, despite being the lesser of two evils was given a shocking reveal that see's him stabbing Kirby twice in the gut after she attempts to save him from Ghostface. Whilst this moment is iconic simply for Kirby and less for Charlie, the brilliant line "4 years of classes together and you know notice me now? You stupid bitch" really does add some serious flavour to the character, and portrays him as a more heartbroken character as opposed to the frantically unhinged killers of the past. Charlie ultimately meets his demise by Jill herself, and once again that being so emotionally invested in these ladies is probably what got him in this situation. Poor Charlie can't catch a break. 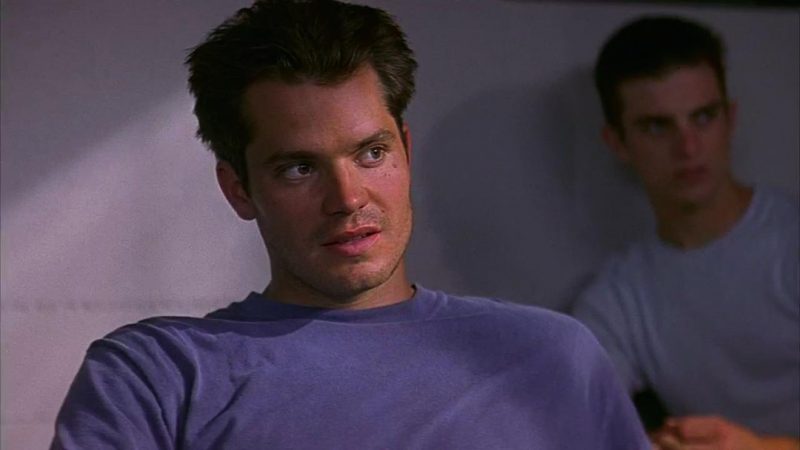 5. Mickey - Scream 2
Mickey is easily one of the most naturally unhinged on the list, and wastes no time proving this from his erratic and unpredictable behaviour once he's revealed as the number uno killer is Scream 2. Despite being delightfully evil, what knocks Mickey down to fifth place is simply his own motive for snapping, one that relies purely on the fact that he is unapologetically a nut-bag. His motive (or lack there of) of blaming the movies is a major step-down from its predecessor, but still effective all the same. What sets Mickey back is his willingness to bring up Maureen to Sidney in which he is totally impartial and irrelevant, weakening this moment and overall effectiveness of the character himself. Yes bringing up Maureen is relevant once Mrs. Loomis comes into the picture, but prior to this it comes across a little desperate that Mickey is so willing to rehash last year's killings to Sidney when trying to orchestrate his own.

In saying this, Mickey's lack of motive and what is essentially him sending himself to the chambers wanting to be caught is demented, and works entirely in his favour as the cooky and off-kilter film class boyfriend to Haley. What also knocks Mickey down to the back end of this list is Craven & Williamson's lack of effort in trying to make him ominous, or to at least give him some sort of red herring status; he's so obvious that you find yourself immediately looking for killer number two the moment he is revealed. Craven is smarter than that, and we knew we were stood on a rug waiting for it to be pulled right from under us; what we also knew was Mickey was not going to be the guy to do that. 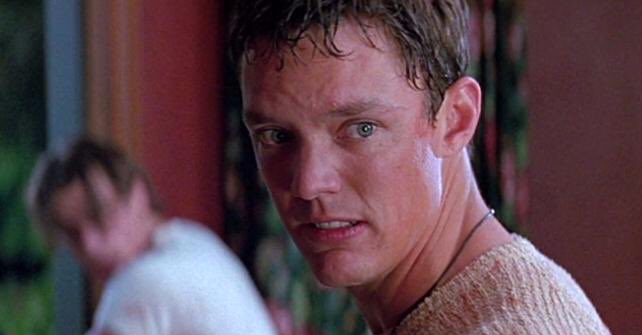 4. Stu Macher - Scream
Stu is easily one of the most memorable characters of the entire Scream franchise, and stands as one of the most deliciously bonkers killers on the roster. Being of the OG maniacs, Stu was simply a ride-along for the carnage, and was nothing but a sidekick to Billy's own deviant plans for revenge and violence against Sidney and co. Stu was the supporting act, and was behind the thought process of killing everyone, leaving them two for dead. The problem here however is Billy's own personal vendetta, which ultimately leads to the plans derailing and the pair meeting their much deserved demise.

Mickey was crazy but Stu was next level, aided by Matthew Lillard's frantically chaotic performance which adds more mystery to the character. Whilst Billy has his motive, Stu is simply present just to chop a few people up, and shows no remorse in slaughtering his girlfriend Tatum, or anyone for that matter. Not only this, but we almost (stress on the almost) come to sympathise with him when Billy takes it too far and cuts him 'til near death, spouting one of the best lines of the entire franchise "you hit me with the phone dick!" whilst choking up blood. Even when we nearly rule him out, Stu comes back for one final hustle with Sidney before ultimately getting a TV to the face. 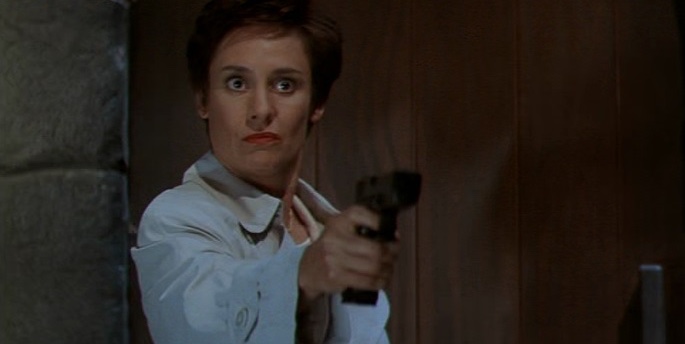 3. Mrs. Loomis - Scream 2
Mrs. Loomis has easily one of the strongest motives of the entire cast of crazies which is essentially what puts her on the no. 3 spot, even about Stu the most entertaining and loopiest of the bunch. What solidifies her spot here is simply her motive, and how far she was willing to go to act revenge of poor Sidney Prescott for ultimately killing her son Billy, regardless if in self-defence or not. It is this blind love and devotion for her son that makes Mrs. Loomis all the more threatening, that regardless of how psychotic Billy was or how many people he murdered, clearly she is just as demented and is willing to do what ever it takes to avenge her son's well-deserved death.

What makes her reveal so satisfying is that we are let in on the lengths she has taken to be incognito, getting a touch up on her appearance and name to make her unrecognisable to the likes of Gale, yet invisible enough to never be spotted by Sidney despite being in plain sight more than once. It's her motive and blame for Sidney and Maureen on her own broken family which is the selling point, and is arguably the most personal attack Sidney has face throughout all four movies. As Mrs. Loomis says herself, it's good old fashioned revenge for her losing her husband to an affair and her son to death. Yes it's elaborate for her to run around murdering everyone, especially Randy for simply talking a little too much shit about her precious Billy, but her motive is the most honest and most feasible. Shit, I'd kill anyone for trying to ruin that crystal white suit of hers too. 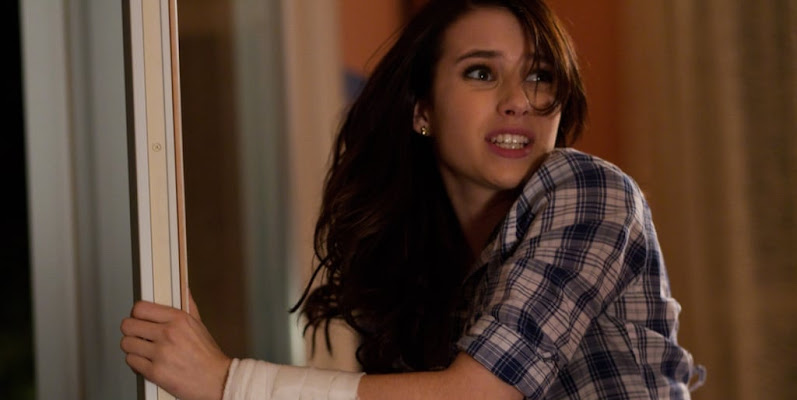 2. Jill Roberts - Scream 4
Scream 4 was the blessing that each Scream fan had waiting for nearly 10 years to arrive, and when it did it was released to mixed reviews, and soon became loved as it grew older with age. One of the huge factors in why it went down a treat was the shocking reveal that Jill Roberts, Sidney's younger cousin was in fact one of two killers, and proved just how extremely unhinged she actually was. Whilst Emma Roberts performance is shaky (she would have KILLED it if Scream 4 was released today), there is no doubt that the character of Jill is a layered and unpredictable one. A character dedicated to becoming the new "Sidney".

Firstly, her reveal comes out of nowhere, and on first viewing really is a shocking reveal, perhaps the most shocking of the entire franchise, and what happens from then on is gold. First she shoots Trevor straight on the cock and balls after after claiming she is not the girl you cheat on (evidently not), then she goes on to betray Charlie so she can get that spotlight directly on her. Jill's motive for murder is very relevant in this contemporary age of social media fame, and is more relevant now nearly ten years later than it was in 2011. Her motive is clear, her reasoning is cold and unflinching, and to do it all in the name of online fame is the embodiments of the modern teenage mind-frame. Jill even lets us know that it's worth killing her own mum all in the name of staying true to the "original". Shit, the bitch will ram a knife into her chest and throw herself through a table just to get away with murder, and it would have worked too if it wasn't for you meddling kids! 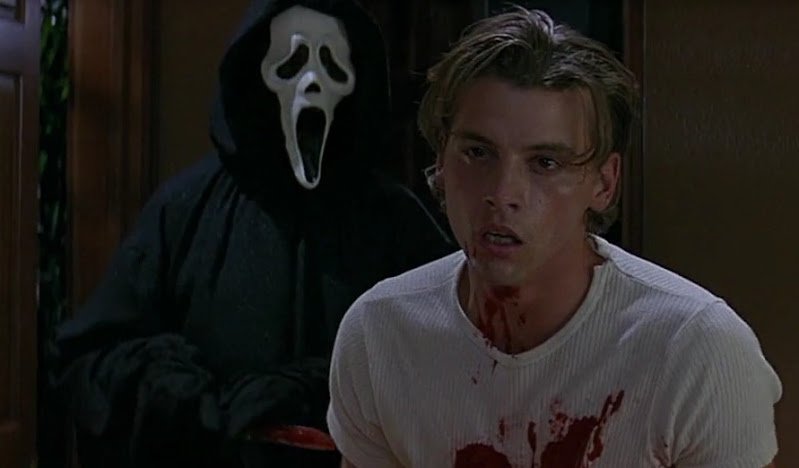 1. Billy Loomis - Scream
And finally without much surprise to anyone comes to number 1 killer of the entire franchise, and is arguably the cause of Sidney's tragic life (if we pretend Roman actually isn't behind it all), mr. Billy Loomis, the OG crazy cat of Scream. Billy, Sidney's boyfriend spends the entire film being a red herring as Craven & Williamson toy with us constantly whether or not he is the killer, only to fake his death and then to bring him back for one final scare. What makes Billy so iconic is the clear screw-loose attitude he adapts in the final act, one that is evident throughout the whole film once you know he's the killer.

Billy's motive is arguably the most in tact, and his reasoning for starting all this is most convincing, blaming Sidney's mother for his mum leaving his dad, only to then kill her and act out more slaughter on her anniversary to Maureen's daughter. It's seriously demented and goes a long way in proving just how mental and batshit crazy Billy Loomis really is. With the way Mrs. Loomis behaves in Scream 2 its clear that bonkers just runs in the family, and that it was only a matter of time before Billy-boy snapped. In the wise words of Billy Loomis "we all go a little mad sometimes"; indeed you did Billy indeed you did.