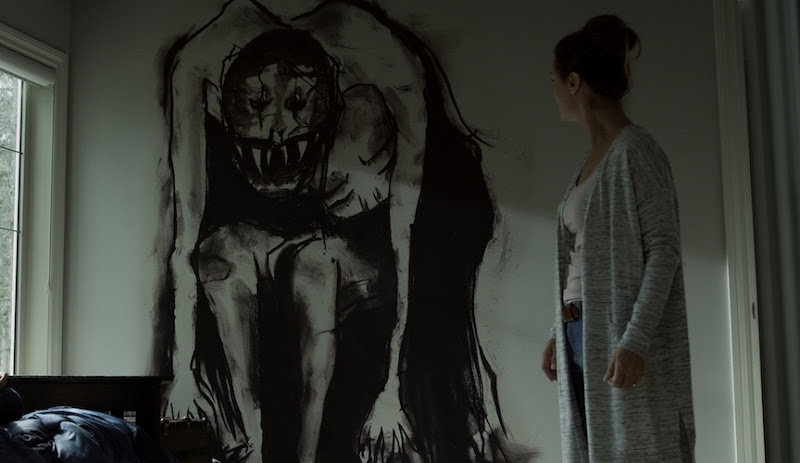 Despite treading along familiar territory without adding much to an already over-stuffed sub-genre, Z is nevertheless a genuinely intriguing and often chilling horror with a nasty final sting.

When Beth and Kevin's eight-year-old son Joshua develops an imaginary Friend named Z, they think it's cute... But they soon realize just how wrong they are. Z becomes a terrible influence on Josh and their innocent son turns into someone they barely recognize. It's only when Beth starts uncovering her own past, that she learns that Josh's new friend Z, may not be so imaginary, after all.

Films like Z belong in a specific breed of sub-genre that has grown stale over the past decade, emulating various ways to possess or curse a child. Children are probably the most hated species in film history period, and amount to absolutely nothing but hardship and heartache in 99.9% of horror films out there. So, you can imagine my enthusiasm when tackling with yet another cursed child movie which see's our pre-pubescent infant shackled with its own omen which eventually begins to control his life and the suffering family around him. Sounds familiar right? You might mistake this for the sort of tripe you'd find on the Horror Channel at 11 am on a Tuesday night, and although on paper Z seems like the find of horror to fit the bill, it is much better, holding itself at a higher standard than your usual genre fodder.

Brandon Christensen's Z hit Shudder streaming early May, proving to be quite the sleeper hit given that there has been very little buzz around this neat little slice of horror schlock. Resembling the likes of a watered-down The Babadook or a more elaborate version of The Boy, Z takes on the possession over a family narrative route with a serious and unforgiving nature. While not everything gets the payoff Christensen so badly reaches for, often sinking like a led balloon in a sea of conventional waffle, when Z works it's works well, and proves to be quite the fuelled fright fest for a late night viewing.

There isn't much meat on the bones here that we have bared witness to before, and much of the familiarity isn't ever spiced up with a change of perspective or with a new angle. The saying if it's not broke don't fix it does come into play, and although this can justify a few tedious character moments that aid absolutely nothing, here in lies more than a handful of familiar plot points and scares that are utilised with highly effective results. Jump scares galore with admission, which with a film like Z isn't necessarily a negative thing at all. Tension bubbles to palpable levels towards the final act as our story takes a nastier and more sinister turn, and sprinkled throughout are some note-worthy jump scares that use its menacing antagonists figure to its advantage.

Z follows a very strict three-act structure, which is a required taste when attempting to establish yourself as something more than generic fodder. This three act structure works to its advantage, and provides a crisp portrayal of our central character Elizabeth who's mental deterioration comes with devastating results. Keegan Connor Tracy's (she's the one from Final Destination 2 that get impaled by a shattered pole in her car remember?) performance is brilliant as she carries the film on her dainty little shoulders, executing hysteria and fear with genuine believability. Her character is fleshed out, troubled and ultimately righteous, even if the third act's nasty intentions take her arc to a fresh and unsettling level. Generic plot points and an over-familiar narrative structure may cause deja vu for most viewers, but there are enough little nuggets of unexpected gold buried within to make all that digging worth it. Welcome to the horror sleeper hit of 2020.