I Know What You Did Last Summer Review 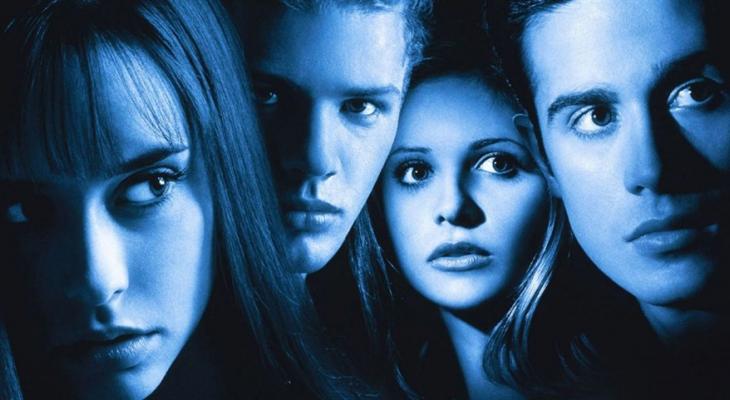 VERDICT
Whilst nowhere near as sharp as Scream; I Know What You Did Last Summer is nevertheless an iconic, suspenseful and well-crafted slasher that highlights Williamson as one of the horror genre's best asset of the 90's.

After a final night of high school and ready to hit college, four friends are involved in an accident on Winding road after hitting someone with their car. In a panicked stated, the teens make the fatal mistake of dumping their victims body in the sea in the hopes of pretending nothing ever happened. Exactly one year later following the accident, the four teens find themselves stalked by a hook-wielding maniac ready to act his bloody revenge.
The late 90's birthed what was arguably the best thing to happen to the horror genre since Halloween; Wes Craven's Scream. Not only did it revive the dead horror genre with a new energetic lease of life, but it also single-handedly reinvigorated the slasher sub-genre for a fresh and more savvy audience who endured nearly an entire decade of tired mythos and elaborately silly franchise continuations. Leprechaun in Space may tickle your fancy, and props to you momma, but a rebirth of a beloved sub-genre was exactly what the late 90's needed, and has becomes somewhat of an iconic half a decade within horror movie history.

After Scream stunned audiences in late 1996, the slasher genre cashed in on Craven's success and began to spawn many slashers that many deemed carbon copies of Scream itself. Whilst there are certainly kernels of truth behind the increase in the whodunnit slasher format following its success, many of them still stand as fairly enjoyable slasher movies even by today's standards, with only a small few have surpassed this to become genuinely worthy slasher worth a cult following. The post-Scream rise of the slasher birthed the likes of Urban Legend, Cherry Falls, The Faculty, Valentine and even Final Destination; however none have captured the suspenseful effectiveness quite like I Know What You Did Last Summer.
To discuss IKWYDLS it's near impossible for anyone to not refer back to Scream for its evident inspiration and clear style, but given Kevin Williamson as the writer for both it's hard to differentiate when they are undeniably quite similar. Scream leans heavier into the meta tech-savvy side of things, whilst I Know What You Did Last Summer tackles slasher from a more formulaic standard that see's them approach the urban legend genre trope with a twisted slasher conventions. I know I know, it's hard to sell a movie when you've strapped words like "conventional" and "formulaic" to its description; but I assure you that going back to the essential basics of the early 80's slasher was an ingenious move for Williamson, which with the then modern whodunnit aspect woven in made for a uniquely familiar slasher affair.
Prior to the late 90's slasher influx the body count and the elaborate ways in which a weapon-wielding maniac could knock off its unholy victims was the soul of slasher movies, playing a more crucial part in satisfying its audience over characterisation and suspense. IKWYDLS is a beast of the opposing effect, relaying on an unnerving sense of dread and a layered mystery narrative to keep its audiences hooked (all pun intended). From beginning to end, this little slice of iconic late 90's cinema is pumped full of timely references, fitting characterisation and an unpalatable tension that toys with audience's expectations as much as Ben Willis toys with his guilty party. 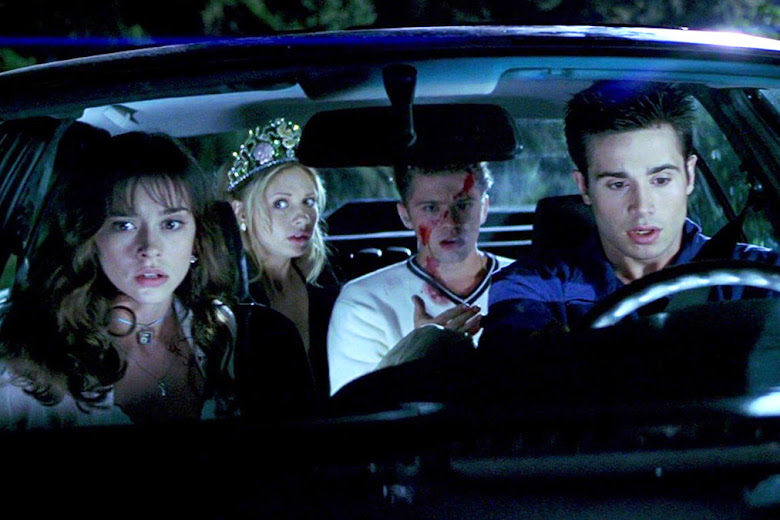 Slasher movies are so quick to lob a paper-thin cast of twelve at our screens with an expectation of you to enjoy each grisly demise all whilst turn a blind aye to their one-dimensional characterisation. IKWYDLS is an exception, whittling its cast down to a handful of distinct characters, all of which are deserving (in some shape or form) of the tragedy that is soon to befall them. The brilliance here is like it's central four, we are put through the wringer of suspense and angst, forced to endure elongated scenes of tension which prove, for the most part, effectively taut. One scene in particular which see's Sarah Michelle Gellar's Helen  involved in arguably one of the best and most suspenseful chase scenes in all of horror movie history - one that is as nail-bitingly tense as it is brilliantly executed.
Helen's chase scene amongst others establishes IKWYDLS as one well worthy its cult status - I mean it's nearly impossible to not think of the parodying Scary Movie when watching IKWYDLS and vise-versa, proving just how influential and iconic this little slice of slasher magic really was. I Know What You Did Last Summer is surely not to everyone's taste, and does pale in comparison to '96's Scream as well as it's brilliant follow-up Scream 2, but judged on its own terms and merits what lays beneath is a genuinely intriguing slasher mystery that utilises its slow-burn premise and taut suspense to create a late 90's slasher worth celebrating. Despite a few glaring flaws with the movies pace and character textures its nonetheless a healthy chunk fo Saturday night entertainment with more on its brain that gratuitous violence excessive nudity. IKWYDLS attempts to bring something new to the table, and although it reeks of a dated formula, that doesn't deflect from the note-worthy performance and a final act reveal that works surprisingly well.
If there is anything worth remembering, it's that I Know What You Did Last Summer is trashy slasher fun that is well deserving of its own cult following. Does Ben Willis have groupies? If so consider me one.