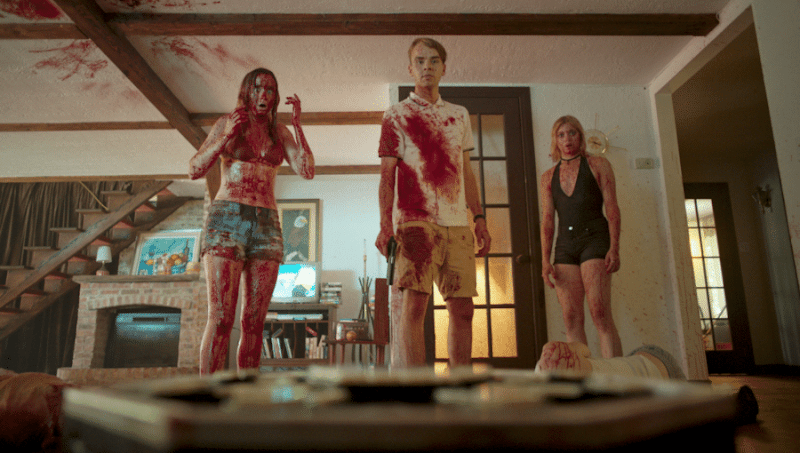 VERDICT
Dancing to the wacky beat of its own drum; Game of Death is a bloodied and bonkers ride pumped full of eccentric violence and modern flare. If you like your satire served extra black with a side order of carnage then look no further - this is one game you'll be dying to play.

When seven fiery teenagers on a trip full of sex, booze, drugs and mayhem uncover a game in the basement of the house they are partying in named 'game of death' they all get involved and play, unwillingly singing their life over to a game with cruel intentions at heart. Once the game begins, this handful of teens soon realise it's a game of life and death, and are forced to kill or be killed in order to make it through this game alive.
Game of Death is in itself its very own nasty force of nature, being the creator of its own rules and playing by them with mischievously gory results. Sebastian Landry &  Laurence Morais-Lagace's directorial horror debut is a beast of a movie experience, boasting a familiar concept with a bizarrely fresh approach with a point of view that feels current. A movie for the Gen Z era, a generation of teens who seem to lack all inhibition and decorum in a post-tech world of boisterous social media apps with various means of seeking attention. This becomes reflective of the rules within Game of Death itself, an almost poetic representation on the entitlement such teens of the now would effervesce. 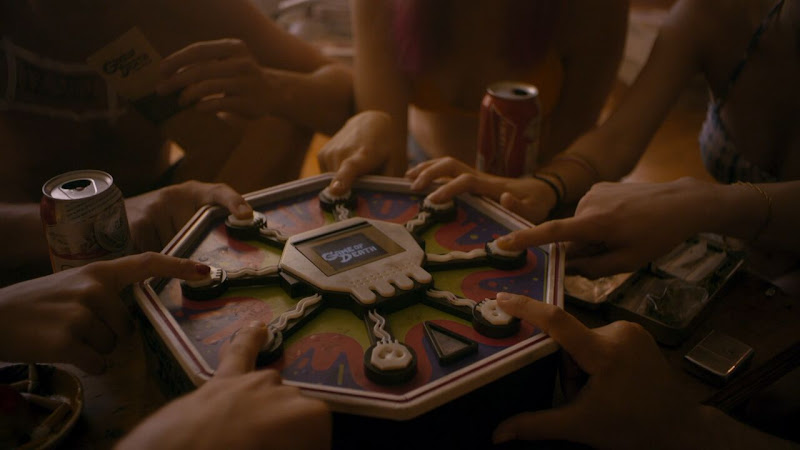 Once this ultra-violent splatterfest gets the ball rolling and the unwilling teens have to choose between them or someone else, all falls into place when their choice quickly turns to taking the lives of any unfortunate person who crosses their path. It's savagely dark yet almost hilariously twisted, splicing open our entitled young cast and exposing the narcissists within. Luckily for the viewer, we are handed a diverse range of characters to play with here, each mere minutes away from a head-exploding death, each dealing with the game and its consequences with entertainingly untamed results. Every one of them handling the game of death in their own manner, playing it how they think morally it needs to be played - and through this comes a wonderful array of blood-splattered violence to have horror and gore hounds alike celebrating with sheer glee.
The concept is simple yet effective, and the delivery taps into its own exuberant style, one that mashes video game stylised visuals with a retro-synth score that's effective enough to make a Millennial reminisce to a fonder time. Whilst it budget does show at time (with a few moments that felt as though they should have been on a grander scale - palliative care home anyone?), This devilish directorial duo absolutely make the most of what they have, pumping out a balls-to-the-wall horror that us unapologetically itself. 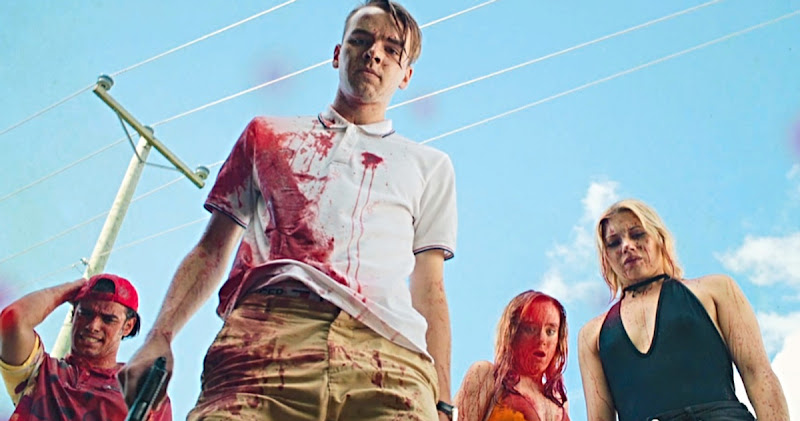 Many will easily be put off by the paper-thin story, but Game of Death does what it says on the tin, and steers away from trying to do anything substantial with character relationships or narrative drama, and instead wastes no time in being exactly what it wants to be - a blood-soaked rollercoaster of entertaining splatter doing what it wants when it wants. Hell, they even throw in a slither of brother-sister incest just to remind you that Game of Death is not a game that plays by conventional rules.
At a brisk and snappy 73 minutes, Game of Death wastes no time in revealing its true colours (crimson read of course), cutting down on the standard feature film padding that tends to add fluff to a movie that needs very little. Imagine Battle Royal for the American teen, only at a sharper pace with a lot less character exploitation. A movie experience with such a free-willing approach to its subject matter, one that buckles us up and takes us for a wild ride that you never knew you needed. The fresh-faced and talented cast of youngsters help aid the more subtle moments to the finish line, and allow us to grow a genuine attachment despite its 1 hr and 13 minute runtime. If you have a lust for blood, board games and a retro style to boast, then Game of Death is exactly the sort of game you need on our Christmas list.